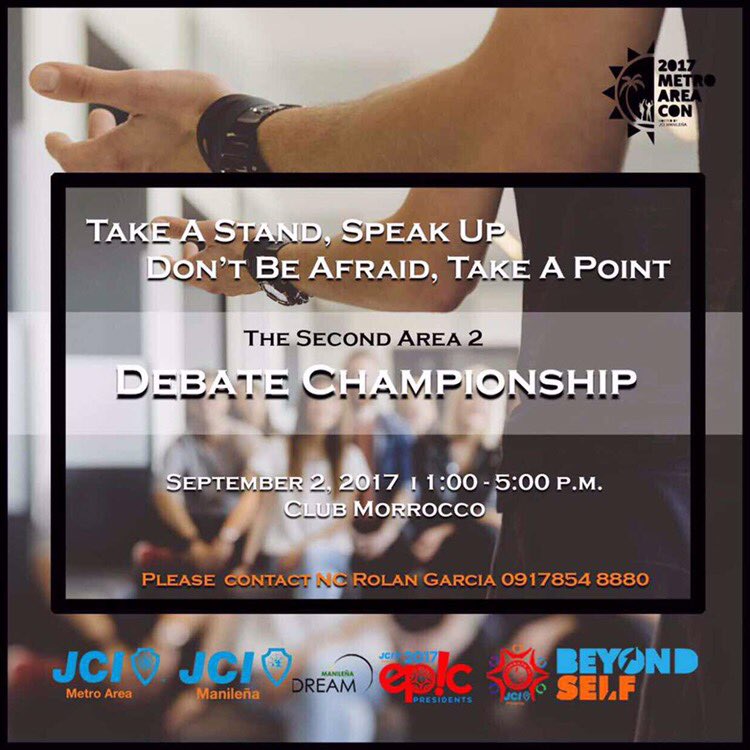 The debate championship will be on Sep 2 (Saturday) from 10am-3pm.  All LOs are invited to send a team.

You may find below the guidelines for the upcoming Debate Championship for the Areacon 2017.

For questions and registration, kindly contact the JCIP National Debate Chairman Rolan Marco Garcia at 09178548880.
You may find all details of the Debate and the upcoming Metro Area Conference (rates, program, accommodation, etc) in https://jcimetroarea.org/areacon2017.

The following are the basic mechanics:

1. Create teams of 3 Debaters
2. Come up with a catchy team name
3. The topics of the debates will be given 3 days before the tournament
4. The debaters can team up with other debaters from other LOs

These are the general rules:

The competition shall follow the Asians Parliamentary (AP) Format. Attached as Annex A to this memo is a brief guide to the fundamentals of AP for your perusal and reference.
a. Instead of the usual 7 min speeches, the speakers will only have to speak for 5 mins each and there will be NO REPLY speaker
b. Points of Information (POI) may be given following the rules of giving POIs (please see attached)
c. After the debate, there will be an oral adjudication given by the Chief Adjudicator of the round.
d. Depending on the number of teams, there will be at least 3 rounds of debate to determine the winner of the tournament.
e. The winning team and the top 3 speakers of the tournament will be announced during the Titan Awards.

For questions and registration, kindly contact the JCIP National Debate Chairman at 09178548880.
Thank you very much.
Yours in JCI,

Assuming the technology exist, This House Would wipe out the memories of convicted criminals instead of sentencing them to jail.